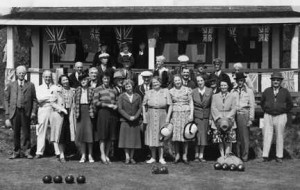 This picture shows the White Rock Lawn Bowling Club house and the membership in May 1947.